Think about famous robots from movies, C-3P0, WALL-E, The T-800, those Nexus 6 models from Blade Runner — now think about all those in the real world.

What may have seemed farfetched a few decades ago is seemingly becoming an imminent reality, thanks to Elon Musk and the announcement of his ‘Tesla Bot” at the company’s AI Day in August 2021. Musk announced that his latest initiative consists of a revolutionary new humanoid robot servant, designed to perform tedious everyday tasks or dangerous jobs such as manual labour.

According to the Tesla AI website, the bi-pedal humanoid robot will be capable of “performing tasks that are unsafe, repetitive or boring” for human beings. Musk says his robot will stand 5’8” tall, weigh 125 lbs, and be able to move at a maximum speed of 5 mph. The Tesla Bots will have an alleged carrying capacity of 45 lbs and a deadlift capacity of 150 lbs.

While the specifications of a humanoid robot sound simple enough (at an extremely high level), the question becomes how Tesla’s tech can make robots out of science fiction and turn them into an everyday reality.

Tesla says the robot is being proposed as a “non-automotive robotic” — meaning it will operate through artificial intelligence — and will function through the company’s Dojo advanced neural network, a supercomputer interface that Musk said can process “truly vast amounts” of data. Dojo supercomputers are the processors that help Tesla vehicles navigate through roads and streets without human assistance. Musk says “it makes sense” to put the Dojo computer systems “onto humanoid form.”

In order for Tesla Bots to get a sense of the surrounding environment, the robot’s heads will be outfitted with the same autopilot cameras that are built into Tesla vehicles, which will also have a screen that displays information. The bots will be operating through Tesla’s Full Self-Driving computer interface, the same as the Tesla Model 3, X, S, Y, and Roadster.

It sounds comical (and maybe even a bit frightening), but Musk reiterated at the presentation that humans could both outrun and “overpower” the Tesla Bots. In the past, the CEO has stated that using AI robots as weapons could pose a variety of dangers, even saying it’s the “biggest risk we face as a civilization.” During a question period following Tesla’s AI Day, Musk stated, “we should be worried about AI. What we’re trying to do here at Tesla is make useful AI that people love and is … unequivocally good.” He said Tesla Bots are “intended to be friendly” and could easily “navigate through a world built for humans.”

The 50-year-old business magnate was quoted as saying he thinks the Tesla Bots will be “quite profound” and foresees physical work being a choice for humans in the future. “If you want to do it, you can,” he said, “but you won’t need to do it.”

Musk implied the Tesla Bot could function similarly to system software like Siri and/or Alexa. As an example, Musk said the humanoids “should be able to” understand commands like, “Please pick up that bolt and attach it to the car with that wrench” or “please go to the store and get me the following groceries.” “That kind of thing,” Musk told reporters, “I think we can do that.”

Musk has an impressive record of innovative engineering feats including reusable rockets, fully electric self-driving vehicles, and brain-interfacing integrated circuits — all of which were questioned by investors before going public. It goes without saying, while imaging what the Tesla Bot might actually be like, it’s important to note that Musk is certainly no stranger to unchartered territory in the engineering and tech industries. 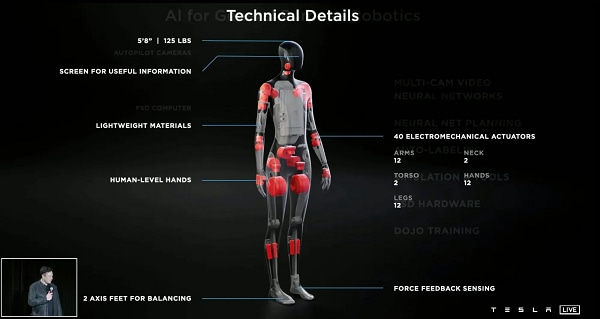 While it’s hard to guess how far off society is from having fully functional robots to do our chores, it could be a long while before Tesla’s robots are fetching you milk and bread on a daily basis even though Musk says a functional Tesla Bot prototype will be ready in 2022.

What do you think about AI robots? How could it affect the world’s economy? Let us know in the comments below or on our LinkedIn and Twitter pages.