Skip to content
Home      Articles      What are Brownfield investments?

What are Brownfield investments?

FDI into a host country can take many forms, including mergers and acquisitions (M&A), greenfield investment, brownfield investment and extending domestic capital. Each type of FDI brings distinctive benefits to the host countries’ growth and welfare but also poses its own unique set of risks and dangers.

The term brownfield refers to the fact that the land being invested in may be contaminated by prior activities that have taken place on the site. However, sites that are significantly contaminated, for example by extreme hazardous waste, are not considered brownfield properties. An investment in a brownfield site will provide the company with significant cost and time benefits, as the facilities are already constructed and likely up to code.

Benefits and Risks of Brownfield Investments

Any investment comes with risks and benefits. It is often the case that while brownfield investments do bring significant risk, they also offer the highest convenience to the investor and are more cost-effective than other types of FDI.

One of the largest risks associated with Brownfield investment is the “buyer’s remorse” that companies often experience afterwards. Although brownfield investments are the most cost-effective and convenient investment options, often coming with already constructed buildings that are up to code and reduced times for startup, they also bring along unique challenges that can leave the investor regretting their decision.

Despite the fact that brownfield projects often include existing equipment, it is rare for investing companies to locate a brownfield facility with the exact equipment and technology they need to carry out their operations. Often, there is also a risk of the previous equipment and technology being faulty and out of date, or the facility itself may require an upgrade, which could unexpectantly increase the investment cost. A brownfield site may also be limited in what enhancements can be made if the investing company leases it rather than buys it outright.

All forms of foreign direct investment (FDI) projects are once again on the rise, including Brownfield projects. With economies beginning to reopen, investors responded quickly, and there was a strong rebound in global FDI levels.

As we have seen, Greenfield investments saw a significant increase in projects related to Sustainable Development Goals due to a growing number of businesses becoming more aware of their sustainability performance. New environmental, social and governance (ESG) goals have become front and center for many companies, and the past year showed a significant increase in the presence of sustainability in their annual report fillings. It seems that Brownfield Investment projects are also becoming a new trend for sustainable investing.

Brownfield investments are a way for companies in the industrial and manufacturing sectors to improve the profitability of their capital assets while also meeting increasing environmental, social, and governmental (ESG) targets. Aveva, a global information technology consulting company, has released data stating that there is a 20-50% cost per ton of increased capacity on a brownfield project versus a greenfield.

Brownfield projects require significantly fewer investments than greenfield projects, which frees up capital that Aveva says could be used for digital transformation initiatives that can lead to increased profits and reduce carbon footprint. Due to these benefits, Aveva predicts that the number of brownfield projects will rise across the globe, stating that over $600 billion in brownfield and revamp investment is planned in the US over the next 5 years.

It is true that brownfield projects are more prevalent in developed economies and high-income countries, but they are not the only markets where brownfield projects are on the rise. Developing countries will continue to see a rise in brownfield investments over the next few years. According to a 2022 industry outlook and forecast report released by Arizton, in the next five years, Brownfield FDI in developing countries is expected to increase by 3-4%.  The report listed Ecuador, Paraguay and the Caribbean as being the markets likely to experience the most growth from brownfield investments. The report states that while Greenfield investments led the Latin American investment market over the past year, budget constraints and poor economic conditions are expected to lead to a decline in Greenfield projects.

Over the past decade, brownfield projects have doubled as a share of FDI in developing countries; however, their prevalence is higher in countries with a higher income level and larger markets. There are many factors that influence the decision to invest in a brownfield project and a country’s level of development has been one of the main driving factors for investors. A market’s level of development reflects its attractiveness and demonstrates the presence of successful firms that will require less time and effort to bring returns. Thus, a country’s income level is a strong predictor of the volume of brownfield projects. 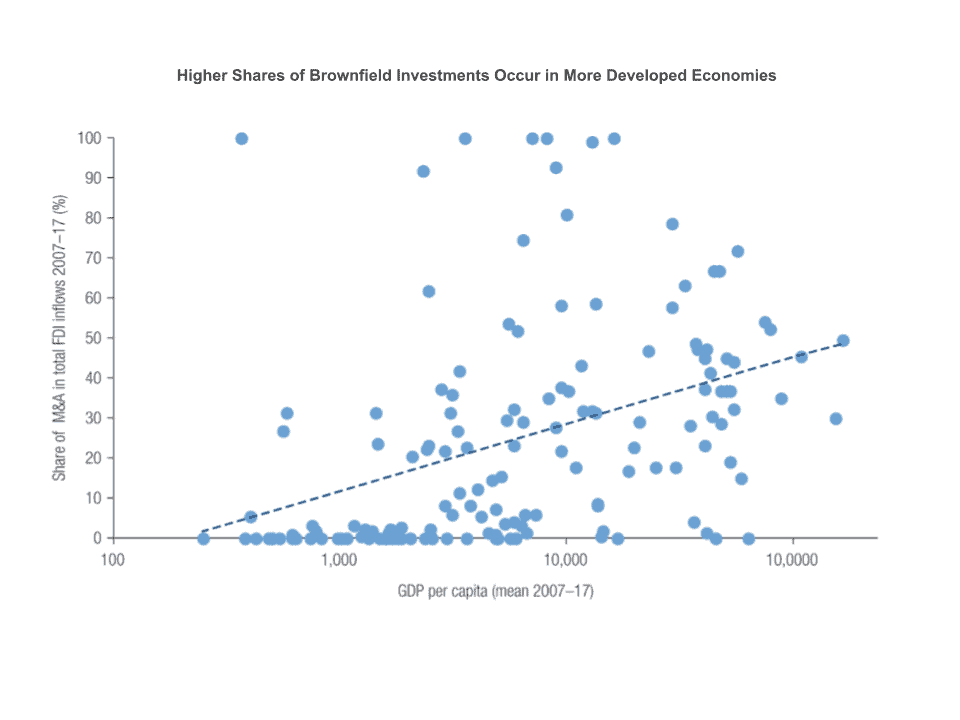 Brownfield investments are more likely to occur in sectors where the following activities are present; activities that rely on land where access is restricted (such as agriculture, mining, and real estate), activities where distribution and client networks are hard to build from scratch (such as food and beverages, wholesale and retail trade, and health services) and sectors that are highly regulated (such as financial services). However, there are exceptions, activities with strong linkages to these industries may also attract significantly greater shares of brownfield investment, Manufacturing activities with these linkages such as food processing, tobacco, or pharmaceuticals are an example of these exceptions.

There are also distinct differences between sector trends for brownfield investments and the income levels of the host country.

High-income and upper-middle-income countries are more likely to have a substantial share of brownfield investment in all the sectors mentioned above, while also adding high volumes of investment in the manufacturing sectors.

The Future of Brownfield Investments

Along with sustainable FDI trends, we are also seeing government support for brownfield projects rise, something that was virtually unthinkable just a few years ago.

Most notably, earlier this year, President Joe Biden announced $21 Billion USD in new federal spending dedicated to cleaning up hundreds of brownfield sites in prime industrial locations. This funding came along with the Infrastructure Investment and Jobs Act, which will fund the infrastructure needed to access brownfield sites, increasing their value and encouraging investment.

While Brownfield investments are certainly on the rise, like all other forms of FDI, the growth trends are at risk of slowing due to factors such as continued supply chain disruptions, changing consumer demand patterns and lingering geopolitical issues.