After more than a year of negotiations, the governments of the United States, Canada, and Mexico announced they had reached a trilateral free trade agreement that modernizes the way all three countries generate economic growth and help raise the standard of living between them.

The new agreement, the United States-Mexico-Canada Agreement (USMCA) is essentially NAFTA 2.0 but with updated provisions for the modern world. Originally in 1994, the US, Canada, and Mexico created the world’s largest free trade agreement through NAFTA, strengthening the rules and procedures between all present parties.
Economically, likewise with NAFTA, the new agreement will reinforce Canada’s strong economic ties with the USA and Mexico, and vice versa, using updated provisions that will address 21st-century trade issues and promote opportunities for the more than 570 million people who call the continent home.
From a number’s standpoint, North America has a population of nearly 490 million consumers and a combined GDP (gross domestic products) of more than US$22 trillion.
Under the new free-trade system, all parties will see an overwhelmingly positive effect on their respective economies. The USMCA will open new export opportunities, act as a catalyst to build internationally competitive businesses, and help attract foreign investments. The integration will help maximize the countries’ capabilities to make their economies more competitive and innovative.

When the USMCA agreement was signed on November 30, 2018, it became the first major update to the clause since its creation almost 25 years before. Though all parties have signed, the USMCA must first be approved by each country’s legislature before it can be implemented. Meaning, NAFTA is still in effect.
Once the new deal comes into effect, a number of key economic differences will be put into place; increased dairy-market access for the US, a new sunset clause, stricter rules within the automobile industry, and an overall strengthening of intellectual property protections.
Within the dairy industry, the US will be able to export the equivalent of 3.6 percent of Canada’s dairy market, a raise from NAFTA’s less-than 1 percent, which will significantly benefit the United States’ small and medium-sized dairy businesses. In the agricultural sector, Canada will give the US more access to its poultry, turkey, and egg markets while Mexico agreed to allow imports of specific US cheeses.
The USMCA’s new sunset clause means the terms of the agreement expire (or “sunset”) after 16 years. A provision has been made that allows a review of the deal every six years at which point the US, Mexico, and Canada can decide to extend the newfound agreement.
In the automobile market, the USMCA has increased the requirements for domestically built automobiles to qualify for zero tariffs. Now, in order to get the zero-tariff break, 75 percent of a car’s parts must be manufactured within one of the three countries for it to be able to pass through, duty-free – up from 62.5 percent from NAFTA. Additionally, 40 percent of each car produced must be made by workers who make at least $16 an hour (by the year 2023) to avoid paying duties.
In getting Canada and Mexico to agree to the USMCA, the United States government agreed to end steel and aluminum tariffs on both countries.
The new deal will also strengthen intellectual property protections. The United States, a long-time leader in the tech industry, faced piracy and privacy concerns, which has been adapted through the new agreement by protecting those rights.
Important changes to intellectual property rights within the USMCA include a 10-year data protection on biologics. Under NAFTA, pharmaceutical companies (in Canada) had an eight-year period of market exclusivity to manufacturers of certain drugs, while America had a 12-year term. In essence, it was the length of time pharmaceutical companies could hold patents on certain biologics. The agreement will extend the period of data protection to ten years.
The result will be the creation of generic medicine as a cheaper alternative to the original brand-name products.
With NAFTA, wages remained low in Mexico, which has made the country an attractive destination for American companies for many years. Under the old agreement, Mexico also lacked the incentive to reform its labour laws; meaning workers could rarely join collective bargains and unions.
USMCA however, guarantees Mexican workers the right to unionize, approves safe working conditions, and bans the use of forced labour.  By boosting wages and benefits in Mexico, US companies will reduce the need to outsource jobs and Mexican workers won’t feel required to work in America. Labour protection laws will also help Mexican consumers and small businesses – when workers take home more money and feel more secure in their careers, they can spend money more freely. 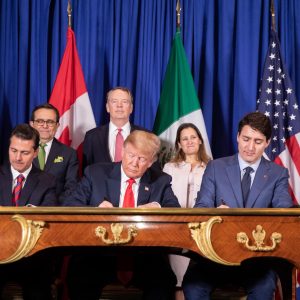 According to a study by the International Trade Commission, the USMCA would add thousands of new jobs in the North American automotive industry alone and stimulate billions of dollars in new investments between the three countries. The Commission estimates that besides boosting the American GSP by US$68.2 billion and adding roughly 176,000 jobs, exports between the US to Canada and Mexico would increase by US$19.1 billion and US$14.2 billion respectively, an increase of 5.9 and 6.7 percent from where it currently stands.
After initially signing the USMCA, all three countries now face individual hurdles before the new agreement can be put into effect. Mexico became the first country to ratify the agreement in June of 2019, supported by the importance of the country’s trade relationship with the United States.
In Canada, the bill was introduced to the Canadian parliament in May 2019, but the government said it would move on with its ratification process when the Unites States does.
Congress in the United States is not yet entirely satisfied with the agreement, despite the Democrat’s push to go ahead, albeit with provisions …therefore it remains to be seen when the treaty will pass, until then, stay tuned!

Interested in learning more about the current state of trade and export in North America, and how it will affect your business development strategy? Contact our resident specialist, Stefan Calimanu, VP Trade & Export Services at stefan@researchfdi.com for a free consultation.