NASA highlights the economic impact of the Mars mission

NASA’s Perseverance rover has become the latest man-made infrastructure to touch down safely on Mars.

After a mammoth 293 million mile journey, NASA’s Perseverance rover safely touched down safely on the surface of the red planet on February 18, 2021. The six-wheeled rover landed inside the Jerezo Crater which is believed to have been a lake millions of years ago. Perseverance will examine different types of rocks formation to determine whether they contain traces of microbial life. The vehicle is equipped with a repertoire of scientific devices to contribute to its objective, including a helicopter drone that plans to attempt the first powered flight on another planet.

But at what cost?

According to NASA, the mission is expected to cost $2.9 billion. The hefty price tag makes Perseverance the third most expensive Mars mission, trailing Viking 1 & 2, and the Curiosity rover from 1975 and 2011, respectively.

NASA has since released the results of its first-ever agency-wide economic impact report. The agency had commissioned its first economic impact study to better understand how the US economy can benefit from America’s lunar and Mars exploration efforts. The report shows that the space agency generated more than $64.3 billion in total economic output during the 2019 fiscal year, supported more than 312,000 jobs nationwide, and generated an estimated $7 billion in federal, state, and local taxes throughout the United States.

“In this new era of human spaceflight, NASA is contributing to economies locally and nationally, fueling growth in industries that will define the future, and supporting tens of thousands of new jobs in America,” said NASA Administrator Jim Bridenstine. “With an investment of just one-half of 1% of the federal budget, NASA generates significant total economic output annually. This study confirms, and puts numbers, to what we have long understood – that taxpayer investment in America’s space program yields tremendous returns that strengthen our nation on several fronts – a stronger economy, advances in science and technology, and improvements to humanity.”

NASA’s Perseverance Mars rover used its dual-camera Mastcam-Z imager to capture this image of “Santa Cruz,” a hill about 2.5 kilometers away from the rover, on April 29, 2021, the 68th Martian day, or sol, of the mission. (Credit: NASA/JPL-Caltech/ASU/MSSS)

Additional key findings, taken from the report, are as follows:

It goes without saying but interplanetary space travel and exploration is a justifiably expensive undertaking. All previous Mars missions have cost billions of dollars — even some that launched five decades ago — and Perseverance is no different. NASA expects to spend $2.9 billion, according to The Planetary Society –adjusted with inflation — by the end of its lifespan. 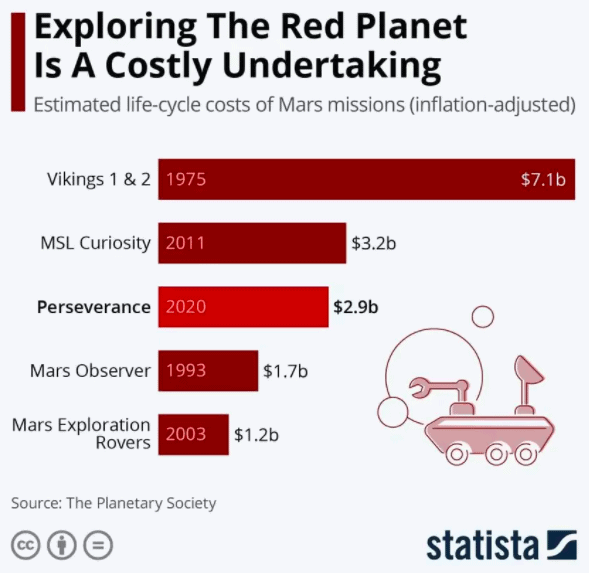 Despite its costly price tag, Perseverance is the seventh most expensive spacecraft in NASA’s history of planetary exploration and the third priciest Mars mission. The cost for Viking 1&2 skyrocketed after missing its original launch. All four Mars projects remain the most expensive missions ever undertaken by NASA.