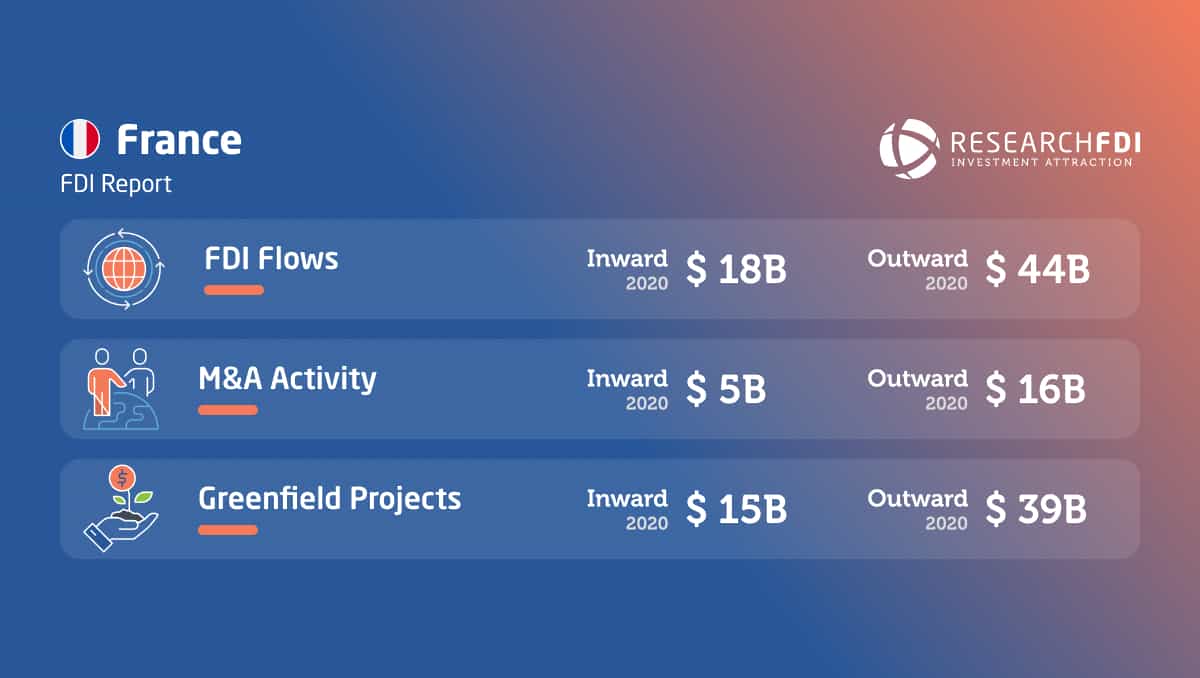 The Covid-19 epidemic has heavily struck France. According to data from UNCTAD, FDI inflows have dropped by 47 percent between 2019-2020. UNCTAD’s World Investment Report 2021 highlights that this is mainly owing to fewer M&A sales, which plummeted from USD 18 billion to USD 5 billion. The country attracted approximately USD 18 billion in FDI in 2020, down from USD 34 billion in 2019. The decline in FDI has also reduced the number of jobs generated or sustained by 13% since 2019.

FDI projects related to manufacturing operations were the leading contributor to employment in 2020, accounting for 12,875 jobs, or 37 percent of total employment. Decision-making centers followed manufacturing with 274 projects and retail outlets with 163 projects.

The main invested sectors by FDI stock in 2020 were: manufacturing, finance and insurance activities; real estate and wholesale and retail trade. Manufacturing, finance and insurance and real estate made up the majority of FDI stock, adding up to 76.1 percent.
Despite the crisis, several strategic industries, such as health care (an increase of 40%) and renewable energy (up by 13%), saw a rise in investment.

Looking at FDI stocks in France between 2016-2019 shows that the U.S. is the largest investor in the country by FDI stock. The U.S. is followed by the Netherlands, United Kingdom, Belgium and Spain.

France is one of the top ten economic powers globally, with many assets to entice international investment. France has a business climate conducive to investment and a legislative structure that is reasonably stable and transparent.

France has an advanced infrastructure and offers quality public services. France is also home to a highly trained and productive (second in Europe in terms of hourly output) workforce. Finally, the country’s economy is highly diversified, with players ranging from large MNEs to tech start-ups.