Due to the COVID-19 pandemic in 2020, FDI flows to Germany fell considerably – decreasing by 34%, down to $36 billion. Lockdown measures, multiple phases of COVID-19, supply chain disruptions, plummeting business earnings, and the delay of MNE investment plans were some of the main causes for the contraction of FDI inflows in Germany.

Nonetheless, compared to other developed nations and the EU average, FDI inflows to Germany have been relatively resilient. To illustrate, FDI flows to developed nations declined by 58% to $312 billion in 2020, down from $749 billion in 2019, accounting for more than 80% of the overall decrease. Moreover, Europe has recorded the largest drop in FDI: inflows have decreased by 80 percent to $73 billion. FDI inflows to the United Kingdom dropped by 57%, while France experienced 47% a fall in FDI, while the U.S. experienced a 49% drop over the same period. 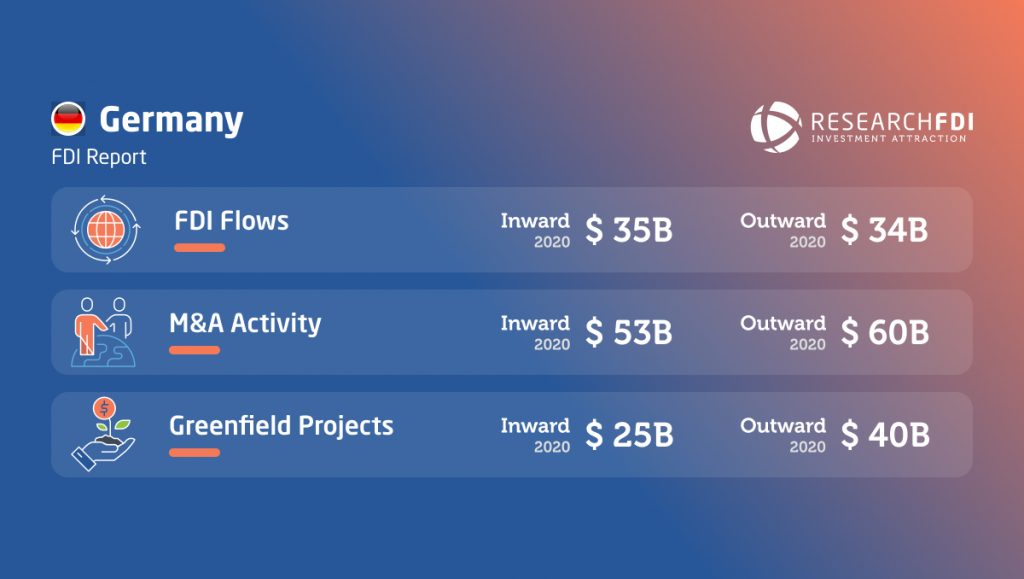 In 2020, the United States was the leading source of investment in Germany, with US-based businesses responsible for 254 projects, followed by Switzerland (219) and China (170). While the U.S. was the biggest investor in Germany in 2020, most FDI inflows still came from fellow EU countries. While EU-27 made up 33% of FDI inflows to the country, other European countries made up 28% of the total FDI inflows. In comparison, investment from North America only contributed 17% to total FDI flows, while 19% of investment came from Asia. In 2019, Luxembourg (18.5%), the Netherlands (17.5%), the USA (11.6%), Switzerland (8.3%) and the UK (7.2%) made up the majority of FDI stock in the country.

ICT and software were the most popular investment sectors in 2020, accounting for 19 percent of all greenfield FDI projects and expansions. Business and financial services were in second (17%), followed by consumer products (10%), and industrial machinery and equipment (9%). In 2020, sales, marketing, and support activities accounted for over 40% of all greenfield FDI projects and expansions, followed by manufacturing and R&D (19%) and business services (18%).
Looking at the FDI stock in Germany in 2019, the data paints a different picture. Investment in financial and insurance activities (33.9%) have dominated the overall FDI landscape in the country, followed by manufacturing (24.2%), wholesale and retail trade (11.3%) and ICT (6.5%). The dominance of ICT and software industries for FDI flows in 2020 illustrates the rising importance of these industries in Germany’s FDI landscape.

Some of the largest acquisitions in Germany in 2020 were the sale of Thyssenkrupp’s elevator business for $18.7 billion, Elanco’s (United States) acquisition of Bayer AG’s animal health business for $6.9 billion, and Lone Star Funds’ (United States) purchase of BASF’s Construction Chemicals Business for $3.5 billion. With big expansions by US carmaker Tesla and Chinese battery supplier SVOLT, Germany is becoming an increasingly appealing investment destination for e-mobility firms.

Germany was also an attractive location for R&D and production-related investment in 2020. Nearly 1 in 5 companies chose Germany as a production or R&D location. This outcome further validates Germany as a global hub for R&D and manufacturing.

Several elements help make Germany a tempting investment location for multinational enterprises. Firstly, the country benefits from a strategic location in the centre of Europe with effortless access to the European Union member states and further global markets. The country is also politically stable – according to the World Bank, it ranks 29th worldwide for political stability and absence of violent terrorism. Meanwhile, fellow developed nations such as the United States (45th), France (69th), United Kingdom (44th) and Italy (46th) have lower rankings compared to Germany. Another important factor that makes Germany an attractive investment destination is that the country has the largest population in the European Union – providing investors with access to a large and highly skilled labour pool. Germany is also a top investment destination when it comes to the quality of the infrastructure – it ranked 8th globally and second in the G7 for the quality of its infrastructure. Finally, with a globally competitive manufacturing base (~1/3 of the GDP) Germany remains one of the top destinations for manufacturing-related investment.

There are, however, several caveats that companies should consider before investing in Germany. For starters, Eastern Germany (former DDR) is lagging behind Western Germany, with some areas in the region struggling to catch up with their Western counterparts. Furthermore, the country’s ageing population is putting significant pressure on its long-term growth. Finally, Germany is highly dependent on exports – particularly to China, which can place it in a difficult position in the event of unforeseen circumstances such as pandemics and trade wars.

Germany distinguishes itself with a business climate compliant with international standards and with transparency of its judicial system. The German Government is implementing measures aimed at encouraging investments including: