Everything you need to know about cryptocurrency and blockchain

You’ve been using plastic cards as transactions for payments for years. The thought of fishing cash and coins out of your pocket or purse to pay for something is already considered by many to be outdated. Despite the rise of tapping your card instead of having to insert your pin, the idea of digital currency is becoming immensely popular and has even challenged the way people use fiat money.

Imagine having the option to cut out the middle man — major centralized banks or big-time credit card companies — and pay for a transaction with a computer file?

A cryptocurrency is a digital form of currency that has become very popular over the past ten-plus years. If you’re tired of hearing the terms “crypto,” “blockchain,” and especially “Bitcoin” being thrown around without understanding what it all means, we’ve put together a handy little guide to maybe make you feel a little more comfortable in regards to the digital currency field.

A cryptocurrency (or simply, crypto) is a digital or virtual currency that is secured by cryptography, making it almost impossible to counterfeit or double-spend. Cryptocurrencies are decentralized networks based on blockchain technology — a ledger that is enforced by a diverse network of computers. One of the main features of cryptocurrencies is they are not issued by a central authority, government, or bank, essentially making them immune to government interference or manipulation.

It’s inherently a way to cut out the middle man.

Cryptocurrencies are data files that are stored in a digital wallet app on a smartphone or computer. People can send cryptocurrencies to these digital wallets and eventually to other people. Every single transaction is recorded on a public list that is called the blockchain, but we’ll get into that a bit later.

The term “crypto” refers to the various encryption algorithms and cryptographic techniques that safeguard the virtual money into the blockchain ledger.

The most popular and the first blockchain-based cryptocurrency was Bitcoin, which remains the most sought-after and valuable. Bitcoin is synonymous with the cryptocurrency trend — it’s rare to speak about one without the other.

There are thousands of alternate cryptocurrencies with various functions and specifications, some of which are clones or “forks” of Bitcoin, while others are new currencies that were built from scratch.

Bitcoin itself launched 12 years ago under the mysterious pseudonym, Satoshi Nakamoto, who has never been confirmed to be one person or a group of people. The currency began use in 2009 when its implementation was released as open-source software. The exact origins of the creation of Bitcoin are shrouded in secrecy, which doesn’t exactly help the asset’s volatile market.

As of April 2021, there are over 18.6 million Bitcoins in circulation with a total market cap of roughly $927 billion.

Competing cryptocurrencies spawned by Bitcoin’s success, known as “altcoins,” include Litecoin, Peercoin, Namecoin, Ethereum, Cardano, and Doge. While new cryptocurrencies are constantly evolving and created, Bitcoin is the undisputed crypto champion as it currently represents more than 60% of the market’s total value.

Advantages and Disadvantages of Cryptocurrency

Blockchain can get a bit complicated but its core concept is pretty simple. A blockchain is a type of database — a collection of information that is stored electronically on a computer system.

Large databases can house data on servers, sometimes spread out across hundreds r even thousands of computers in order to have the computational power necessary for potentially millions of people to use, simultaneously.

Now that we’ve set the tracks, a blockchain is a sort of database with a differing way of how the data is structured. A blockchain collects information together in groups (or blocks) that hold specific sets f information. Blocks have a storage capacity and when filled, are chained onto previously filled blocks forming a chain of data known as — you guessed it — a blockchain. 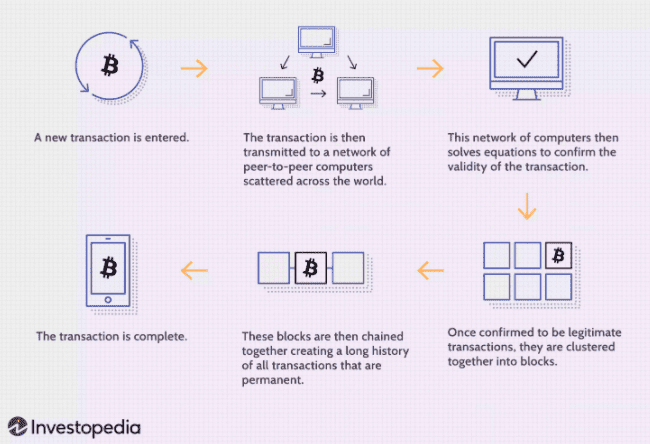 A database structures its data into tables whereas a blockchain structures its data into blocks, all chained together. This makes it so that all blockchains are databases but not all databases are blockchains. The blockchain system also inherently makes an irreversible timeline of data when implemented in a decentralized nature. When a block is filled it is set in stone and becomes a part of this timeline. Each block in the chain is given an exact timestamp when it is added to the chain.

With Bitcoin as an example, the blockchain is a specific type of database that stores every Bitcoin transaction ever made. As Investopedia explains, unlike most databases, these computers are not all under one roof, and each computer or group of computers is operated by a unique individual (or group of individuals.)

Because cryptocurrencies are decentralized, all transactions can be transparently viewed by either having a personal node or by using blockchain explorers that allow anyone to see transactions occurring live.

Regardless of cryptocurrency’s volatile market, it’s clear that digital currency is at the very least, an intriguing asset to consider for investors and regular folk. And hey, if you end up making a boat-load of money, don’t forget who steered you in the right direction.
FacebookTweetLinkedIn
By Bruce Takefman|2021-08-26T09:30:35-04:00April 15th, 2021|FDI Insights|