Before the COVID-19 pandemic rocked the world, small businesses and retailers were already at a disadvantage trying to remain competitive with e-commerce companies that could offer low prices and fast deliveries. Convenience is king.

When COVID-19 forced physical shops to close and consumers to stay home, online shops, specifically Amazon, were in a prime spot to capitalize.

Amazon founder Jeff Bezos has seen his net worth soar. According to numbers from USA Today, Bezos’ net worth in March 2020 was US$113 billion. As of November, the 56-year-old CEO is valued at over US$203 billion.

Amazon itself has turbocharged profits since the start of the pandemic. The multinational tech company reported a 70% increase in earnings in the first nine months of 2020, up US$5.8 billion from a year earlier.

As per a New York Times study, Amazon reported a near 200-percent rise in profits, accelerated by much of North America’s swift shift to exclusively online shopping. Amazon’s sales were US$96.1 billion, up 37% from 2019, with profits rising to a jaw-dropping US$6.3 billion. The pandemic hasn’t only increased the company’s profits but also its expansion. Amazon expanded its fulfillment infrastructure by 50% in 2020, adding more than 250,000 employees in the process. For the first time in the company’s history, Amazon now employs more than one million workers around the world.

As companies around the world made the shift towards cloud-based computing and fully remote work, the already-lucrative Amazon Web Services division grew 29% in 2020, and it now accounts for 12% of the company’s total revenue.

Keep in mind, the company’s exponential growth was all before the busiest season of all – holiday shopping. Amazon said sales could reach US$121 billion in the fourth quarter as online spending ramps up during December.

Amazon spent 120% (US$25.3 billion) more throughout the pandemic, building more warehouses, researching tech, and other capital investments. The spending and profits make it astoundingly difficult for everyone except the company’s biggest competitors (Facebook, Microsoft, Apple, etc.) to keep up with its growth.

Amazon sold nearly US$100 billion worth of products in the third quarter as millions of people practically became reliant on the e-commerce giant. The company’s increased online activity drove a 51% jump in Amazon’s ad revenue.

As of 2020’s second quarter, Amazon’s year-over-year sales increased 40%. The company reported quarterly revenues of US$96.15 billion in Q3 – better than expectations – and its net income increased to US$6.3 billion, up from US$2.3 billion the year before.

By the end of 2020, Amazon plans to accelerate its fulfillment and network square footage by 50%, increasing the company’s ability to deliver packages during a holiday season when most American states and all Canadian provinces are advising against in-person gatherings and parties.

According to S&P Global Market Intelligence, Amazon is expected to bring in US$119.45 billion worth of revenue, an increase of 37%from the US$87.44 billion the company reported in the fourth quarter of 2019. 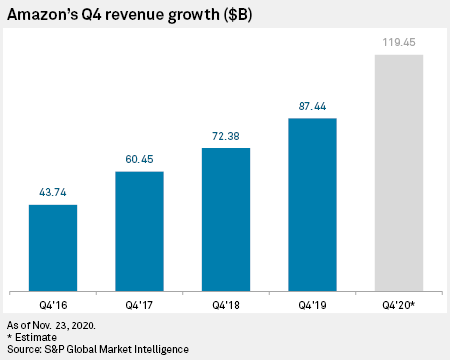 The e-commerce company says it expects to suffer a US$4 billion loss in COVID-19-related costs that took place during Q2.

James Thomson, a former Amazon executive, expects there to be times of constraint on the entire shipping industry, including Amazon. “The whole logistics system just hasn’t grown fast enough to keep up with demand,” he said (via S&P Global Market Intelligence). “At the end of the day, you can only push so many packages through the pipe.”

Thomson said even with that said, Amazon is “better positioned” to beat their earnings than “anybody else” largely due to the fact they have the ability to guarantee fast delivery for last-minute orders in the two weeks leading up to Christmas Day. Other companies can’t guarantee customers that ground-shipped deliveries will make it to their destination on Christmas Eve or Day, after being shipped past December 15 – Amazon can.

Customers can buy items on December 20 and still get them to their desired giftee by Christmas.

In a world where people are trying as best they can to stay away from each other — even unfortunately during the holidays — where small businesses are closed, malls are functioning at reduced capacity, and a hotspot for COVID-19 transmission, the world might need Amazon now more than ever.

And that’s a scary thought for small businesses but music to Jeff Bezos’ ears.