Skip to content
Home      News      We have liftoff: Space Tourism and the Space Economy

We have liftoff: Space Tourism and the Space Economy

The past year has been revolutionary for the space economy, with space tourism finally becoming a reality. While traveling to the stars seemed like a far-fetched dream, companies like SpaceX, Blue Origin and Virgin Galactic have seemingly made it possible, each having flown their first tourist-focused missions in 2021.

Following the milestone number of successful commercial space launches in 2021, it seems like every week there are new announcements of plans for space travel. With more private citizens than ever before making the trip outside of the Earth’s atmosphere in 2022, it is clear that Space Tourism is now a reality. But what does the emergence of space tourism mean for the space economy?

What is space tourism?

Simply put, space tourism refers to the activity of traveling into space for recreational purposes. While to many it seems like an unattainable dream, the concept of space tourism isn’t new, with Dennis Tito, the first space tourist, having paid $20 million in 2001 to go to the International Space Station (ISS) aboard the Russian Soyuz spacecraft.

While approximately 600 people have traveled into space, only a small fraction of them have been space tourists, meaning they traveled into space for leisure or recreational purposes, and not for any scientific research. Between 2001-2009 eight space tourists reached orbit, each of them utilizing government rockets and/or government space stations for their journey. In fact, the 2021 SpaceX voyage was the first all-private mission to orbit with the crew even planning their own itinerary.

Suborbital space flights will aim to reach an altitude that will qualify as reaching space but will not achieve a full orbit. The spacecraft will fly at low speeds with its trajectory intersecting the atmosphere of the surface and will fall back to the earth after the engines are shut off. Suborbital space tourists will reach altitudes of approximately 100 kilometers and will have a few minutes in space, they will also experience some moments of weightlessness as the spacecraft free falls back to earth.

The suborbital space tourism market is currently dominated by two competing companies: Virgin Galactic, which debuted on the public market in 2019 and Blue Origin, the private space company funded almost exclusively by Amazon founder Jeff Bezos. Tickets for Virgin Galactic suborbital space flights are being sold at a cost of $450,000 for the 90-minute spaceflight.

Lunar space tourism aims to complete full trips to the moon with a suitable lunar spacecraft. While no lunar space tourism flights have yet been launched, plans to launch Lunar tourism on the moon’s surface or around it between 2023 and 2043 have been announced.

SpaceX announced plans for the dearMoon project in 2021, the first ever lunar space tourism mission. The project is being financed by Japanese Billionaire Yusaku Maezawa, with a proposed launch in 2023. It will make use of a SpaceX Starship spacecraft with the aim of achieving a single circumlunar trajectory around the Moon. The mission is expected to last 6 days and is currently looking for eight crew members to take part in this historic project.

The space economy, as defined by OECD, includes the full range of activities and the use of resources that create value and benefits to human beings while exploring, researching, understanding, managing, and utilizing space. It comprises all public and private sectors involved in developing, providing and using space-related outputs, space derived products and services as well as the scientific knowledge that comes from various space research. Space tourism is a small subsector of the larger space industry that is expected to see exponential growth in the coming decades.

The space economy is one that is continuously growing and evolving alongside the development of the space sector as well as the further integration of space into our society and economy.

Space tourism has finally become a reality, and while the ticket cost is still unobtainable to most, the cost of booking a trip to the stars is expected to gradually decrease as companies continue to find new and innovative ways to make space tourism more efficient and inexpensive.

Due to significant technological innovations coupled with the increased interest in having access to space, the space tourism market is expanding at a rapid growth rate. 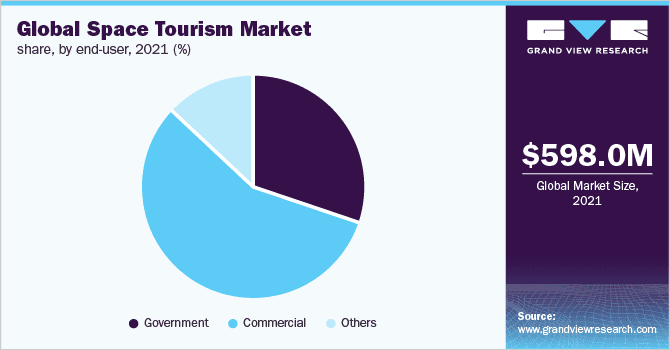 The global space tourism market size was valued at USD 598 million in 2021, with the commercial space tourism market dominating in 2021, gaining a market share of 56.7%. In 2021 alone, there were thirteen commercial spaceflight missions undertaken, with Virgin Galactic, Blue Origin, SpaceX, and NASA having undertaken the majority of spaceflight missions to transport non-astronaut individuals across space and bring them back to Earth after a certain period. 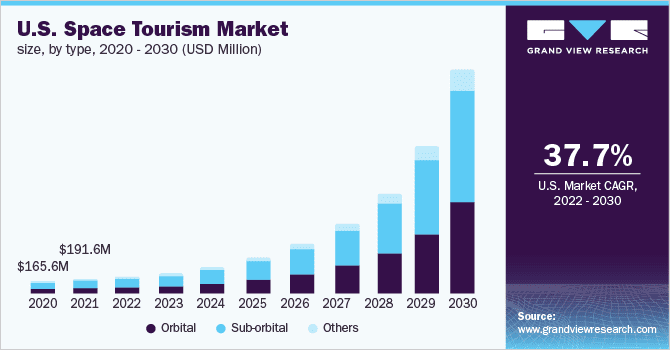 The future of Space Tourism

Space tourism is expected to grow far beyond tourists traveling to space just for the ride, with orbital space flights involving tourists staying in space for a period of time, while the international space station is the only habitable structure in space now, companies have begun to look beyond this.

Designs for Voyager Station, the first ever space hotel were released in 2019 by the Gateway Foundation. The project is now being overseen by Orbital Assembly Corporation, a space construction company, who has recently taken over the project from the Gateway Foundation and is now aiming to launch two space stations with tourist accommodation: Voyager Station, the original design, as well as a new concept design Pioneer Station. Voyager Station is scheduled to open in 2027 and will accommodate an expected 400 tourists. The Pioneer Station is expected to open in three years, housing 28 tourists at a much smaller capacity. While the international space station is primarily a place of work and research, Orbital Assembly’s space hotel fulfills a different niche; they offer a destination for space tourists. While collaborations between Orbital Assembly and the companies organizing space flight such as Virgin Galactic, Blue Origin and Elon Musk’s company SpaceX have not been publicly announced, they are expected.

It is likely that the space tourism industry will evolve during the next decade, as barriers to entry will be reduced, competition will grow, costs will be lowered, and eventually, space travel will be affordable for everyone. The future of space tourism has the ability to positively impact many socioeconomic factors on Earth including creating jobs, educating citizens about space and fostering further innovation in the space economy.