Skip to content
Home      Articles      What are Mergers and Acquisitions?

What are Mergers and Acquisitions?

FDI into a host country can take many forms, including mergers and acquisitions (M&A), greenfield investment, brownfield investment and extending domestic capital. Each type of FDI brings distinctive benefits to the host countries’ growth and welfare, but also poses its own unique set of risks and dangers

While the terms “mergers” and “acquisitions” are often used interchangeably, they do differ in meaning. A merger refers to the combination of two business entities into one, subsequently forming a new third entity. An acquisition refers to the purchase of one company from another, with the purchasing firm absorbing the purchase into its operations.

Put simply, Mergers and acquisitions (M&A) in FDI refer to investments involving the consolidation of companies or their major business assets through financial transactions between companies. This financial transaction can take place in a few different ways, a company can purchase or absorb another company, merge with it to create a new company, acquire some or all of its major assets, make a tender offer for its stock, or stage a hostile takeover. All of these are referred to as merger and acquisition activities.

Benefits and Risks of Mergers and Acquisitions

As we have seen with the other types of FDI, any investment comes with risks and benefits. Mergers and acquisitions can generate significant profits for the owners of the original companies and the owners of the newly merged entity.

Merger and acquisition situations are seen as mutually beneficial for the companies involved. With the goal being to create an entity that is more efficient and effective than the two previous companies were on their own, these deals allow companies to grow their presence and expand their reach.

Mergers and acquisitions are also seen as the fastest way to achieve growth, as they involve already established companies and operations. They are the quickest type of FDI to achieve, avoiding many of the challenges that come along with Greenfield or Brownfield projects.

However, mergers and acquisitions can also bring significant risks. As these projects involve multiple companies merging or being acquired, there are higher risks of integrational delays between the two parties.

A merger or acquisition is a major organizational change, and this change can significantly alter the processes underlying how both businesses operate. If there is not a detailed integration plan in place prior to the merger or acquisition, the two companies may delay the process, functioning separately longer than anticipated, resulting in higher costs than anticipated. Furthermore, transactions involving international companies will require further legal costs, coordination and management to ensure the cross-border integration is successful.

Merger and Acquisition trends in 2022

Mergers and acquisitions, like other forms of foreign direct investment (FDI) projects, also saw a significant rise in 2021. Although, an analysis of Investment Monitor’s Global FDI Annual Report 2022 revealed that foreign M&A levels grew at a faster rate than even greenfield FDI. PWC noted 2021 as being a record-breaking year for M&A, with publicly disclosed deal values reaching all-time highs of US$5.1tn – which included 130 megadeals with a deal value greater than US$5bn. These values were 57% higher than those in 2020, and they also exceeded the previous record of US$4.2tn set in 2007. This record-breaking M&A activity in 2021 was fueled by intense demand for technology, and for digital and data-driven assets, and the pent-up deal-making demand from 2020 that was unleashed.

However, despite global M&A’s new highs in 2021, and predictions of 2022 being another supercharged year, 2022 experienced significant declines in activity. 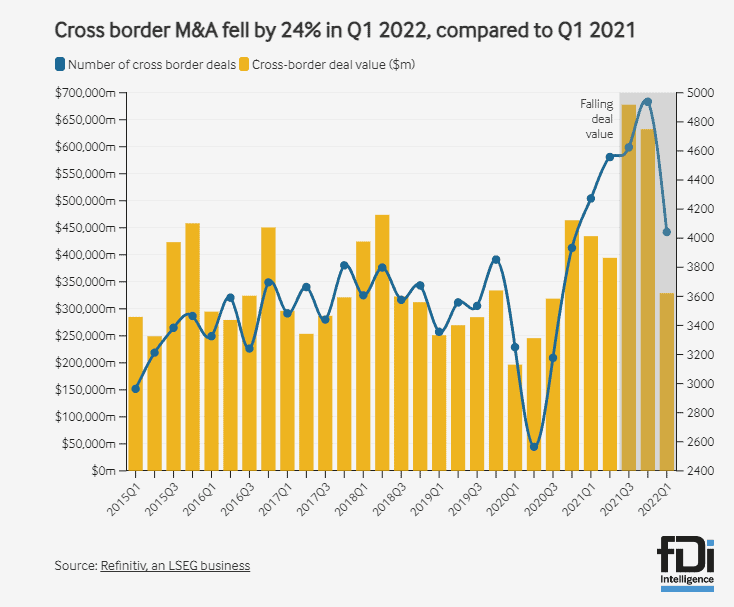 Despite these slowdowns in the first half of 2022, there are still predictions of M&A activity recovering within the second two quarters. According to the Boston Consulting Group (BCG), overall M&A activity, in the second half of 2022 will return to pre-pandemic levels. The M&A market is still regularly active in 2022 and despite its considerable cool downs since 2021, the trends are pointing to levels of activity that are aligned with recent historical averages.

As we have seen, both Greenfield investments and Brownfield Investments saw a significant increase in projects related to Sustainable investing due to a growing number of businesses becoming more aware of their sustainability performance, and M&As are following these trends. According to BCG, the number of deals primarily motivated by environmental considerations, also known as “green deals”, have doubled over the past 20 years, with significant growth being noted over the past two to three years. 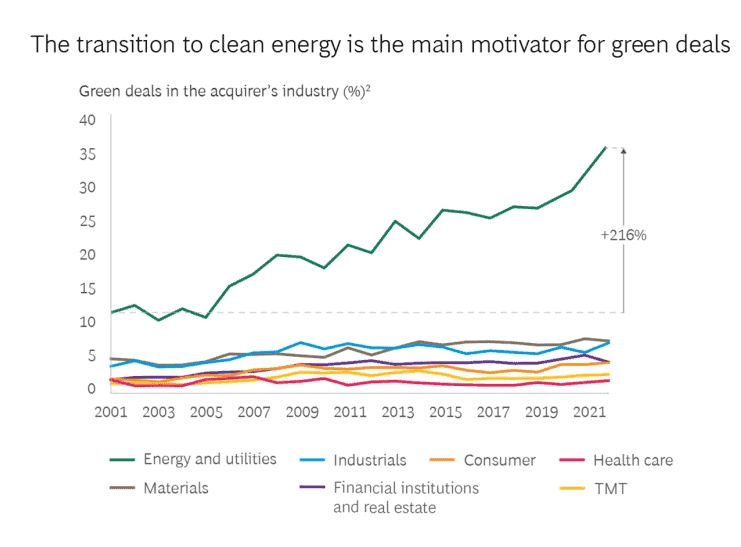 (Graph 2: The transition to clean energy is the main motivator for green deals)

Sustainable investments are taking over all forms of FDI, especially to businesses relating to environmental or societal issues. Considerations surrounding sustainability are seen as a source of value to companies according to BCG, and companies are implementing more sustainable considerations when developing strategies and portfolios.

Companies can use these acquisitions and divestitures to adjust and diversify their portfolios, increasing their appeal to investors. Energy, oil and gas, and consumer products companies face high levels of scrutiny when it comes to their environmental effects, and thus, many are managing their portfolios through M&A deals to achieve better sustainability ratings.

Other sectors such as high technology, financials and real estate were the leading target sectors for foreign investors in the first quarter of 2022.

(Graph 3: High technology, financials and real estate were the leading target sectors for foreign investors in the first quarter of 2022)

While these sectors have seemingly thrived despite the declines 2022 has seen, other sectors have suffered. The industrials sector saw significant declines in the value of cross-borders M&A deals between the first quarter of 2021 and the first quarter of 2022, with deal values falling from US$66bn t0 US$25bn. The healthcare sector has also seen similar declines, with the value of cross-borders M&A deals dropping from US$52bn to US$22bn over the same period.

In 2021, more US-based companies were acquired than any other country, with almost 1500 deals involving an entity acquiring a US business were announced during the year, an astonishing 50% increase from 2020. The UK (United Kingdom) followed the US, becoming the top destination in Europe, followed by Germany, which placed third. Australia also became the leading Asia-Pacific deal country, placing fifth in the ranking.

Spain experienced significant growth, and despite not reaching the top five countries, it was ranked as the fastest growing deal country within the top 10, with number of Spanish companies acquired by foreign businesses increased by 89.3% between 2020 and 2021.

Notably, China was the only country within the top ten to experience a decline in foreign acquisitions, placing tenth globally, having experienced a 4.8% drop compared to 2020. 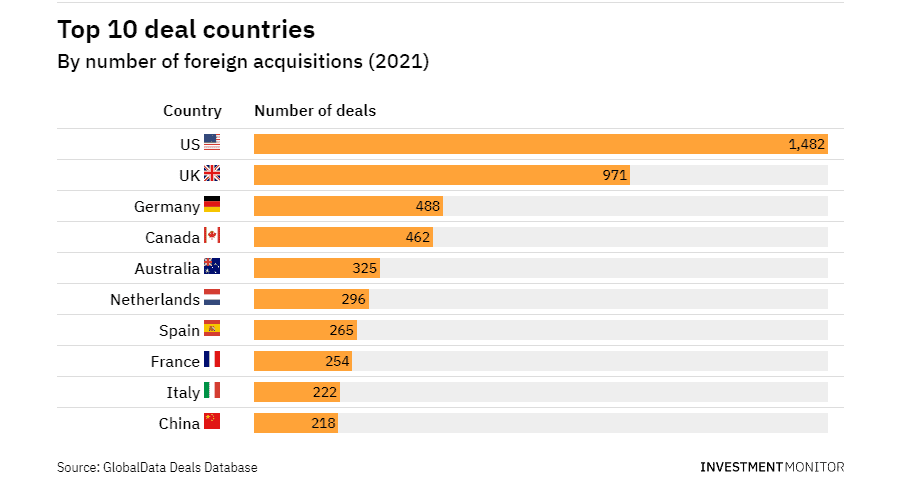 Trends of 2022 are pointing to the US remaining as the most active global M&A market. According to FDI intelligence, US-based acquirers account for 37% of total cross-border M&A activity in the first quarter of 2022. Furthermore, a total of US$55.6bn was announced in deals to acquire US target companies, accounting for 17% of the first quarter’s total.

The Future of Mergers and Acquisitions

Mergers and acquisitions experienced record levels of activity in 2021, with record breaking deal values, however, 2022 has seen some significant declines in comparison. With factors such as continued supply chain disruptions, changing consumer demand patterns and lingering geopolitical issues, there have been worries regarding M&A levels.

However, it seems that despite declines in the first quarter of 2022, experts are hopeful in M&As ability to be resilient against these struggles. It is likely that the second two quarters of 2022 will show returns to historic averages in levels of activity, and we may be able to expect another supercharged year in 2023.