Examining the innovative race to building the world’s first hyperloop

Imagine being able to travel from Miami to Orlando in under half an hour? Or hopping on a hyperloop at 8 am in Montreal and making it Toronto by 8:45 am? Think about tackling the 545-kilometre trip from Mexico City to Guadalajara in exactly 38 minutes. What could you get done with your day by substituting a seven-and-a-half hour drive from Edinburgh to London with a 50-minute hyperloop trip instead?

What may have seemed like a farfetched episode of The Jetsons a couple of decades ago, is now very close to becoming a reality.

Passengers sitting in pods that travel through sealed tubes at 760 km/h has been touted as the fastest way to travel on the planet. By using electric propulsion and magnetic levitation, hyperloop will cut travelling time between major cities from several hours to a mere matter of minutes. The hyperloop idea was first conceived by Elon Musk in 2013, the concept was deliberately open-sourced and designed by a joint team from Tesla and SpaceX before companies across the globe were encouraged to start developing the tech. Over the past eight years, billionaires, engineers, and governments have been racing to get the world’s first operational hyperloop system off the ground. Or rather, on the ground — just really really fast.

While examining the innovative race to building the world’s first hyperloop, it’s important to dive into the budding industry’s major players, where the new high-speed transportation system is in regards to research and development, locations which are the highest contenders to be the world’s first functional hyperloop, and if it makes sense for regions to invest in the world-changing endeavour.

So, strap in — we’re going full steam ahead. Hyper steam.

Biggest players in the hyperloop game

The Richard Branson-backed Virgin Hyperloop (previously Hyperloop One) is arguably the leader in the hyperloop pack. This past November, Virgin Hyperloop became the first company to perform a test with human passengers. The test run took place on a 1,600-foot development track near Las Vegas. The two passengers’ runtime lasted 15 seconds and the hyperloop topped out at a very modest 107 mph.

The first two passengers were Virgin Hyperloop’s chief technology officer and co-founder, Josh Giegel, and the head of passenger experience, Sara Luchian. The duo strapped into the seats of the pod (dubbed Pegasus) and was thrust forward. The test was a major achievement for the company who will continue efforts to make the hyperloop’s goal of 760 mph (1,233 km/h) ready for commercial use.

In 2019, Virgin Hyperloop’s USD $10 billion proposal to build a route between Mumbai and Pune became an official “public infrastructure project.”

“We are working with the State of Maharashtra to develop a Pune to Mumbai hyperloop which will slash journey times down to 25 minutes, support 150 million passenger trips annually, and create a thriving megaregion,” says Virgin Hyperloop. “With a wealth of talent and technological prowess right in India, we’re looking to scale locally, sourcing components throughout the nation.”

Virgin’s Mumbai-Pune project would cover the 92 mile (148 km) distance in just 25 minutes, compared to four hours by plane and three by car. The commercial version pod of Virgin Hyperloop is designed to be able to carry 28 passengers plus pods that will be used exclusively to transport cargo. The hyperloop corridor between the two Indian cities is expected to be ready by 2029, says the company.

Until then, we’ll have to enjoy the Virgin Hyperloop passenger experience through a company rendering. But hey, it’s a start.

Hyperloop Transportation Technologies (HTT) is the first hyperloop company ever created. Headquartered in California and France, it was founded in 2013 and consists of a global team of more than 800 engineers, creators, and technologists in 52 multidisciplinary teams with 40 corporate and university partners. HyperloopTT has offices in Abu Dhabi and Dubai, Bratislava, São Paulo, and Barcelona. The company has signed agreements in the United States, UAE, France, Germany, India, China, Korea, Indonesia, Slovakia, Czech Republic, and Ukraine.
If Virgin Hyperloop is leading the race out of the pack, HTT is definitely leading in growth, global reach, and expansion.

In 2016, HTT and the government of Abu Dhabi announced plans to conduct a “feasibility study” on a hyperloop connection between the UAE capital and Al Ain, reducing travel time between Abu Dhabi and Al Ain to under 10-minutes. The following year, HyperTT signed an agreement with the Andhra Pradesh state government of India to build a track from Amaravathi to Vijayawada in a public-private partnership and suggested that the more than one hour trip could be reduced to five minutes through the company’s high-speed transportation system. The year after that, HTT signed an agreement with the Guizhou province of China to build a hyperloop network.

In 2019, HyperloopTT released the first “comprehensive feasibility study” analyzing a hyperloop system, which found that the system is economically and technically viable and will generate a profit without requiring government subsidies

This year, HyperloopTT has begun the process of integrating their full-scale passenger capsule for human trials.

The Canadian side of hyperloop is courtesy of TransPod Inc.

In 2016, TransPod CEO Sebastien Gendron proposed a new “5th form of transportation,” one that he said mixes airplanes with trains. The Toronto-based transportation company theorizes it can take travellers from Toronto to Montreal in under 45 minutes.

TransPod vehicles are being designed to travel at more than 1,000 km/h using fully electric propulsion and they would require zero need for fossil fuels. Cargo TransPods are designed to carry loads of 10 to 15 tons and have compatibility with wooden pallets and various other unit load devices. Other Canadian routes being developed by TransPod includes Toronto-Windsor and Calgary-Edmonton, both of which have provincial backing.

In 2019, the team announced plans to build the “world’s longest hyperloop test track” in Droux, France. “Our test facility will support our work with the European Union and Transport Canada to define, establish, and standardize the methodology and framework to regulate vacuum-based hyperloop travel systems,” said Gendron. The test track is currently under construction, though the COVID-19 pandemic has caused “significant delays.” Gendron says the company’s goal is to beat the current HSR (high-speed rail) speed record of 600 km/h over the next three years. 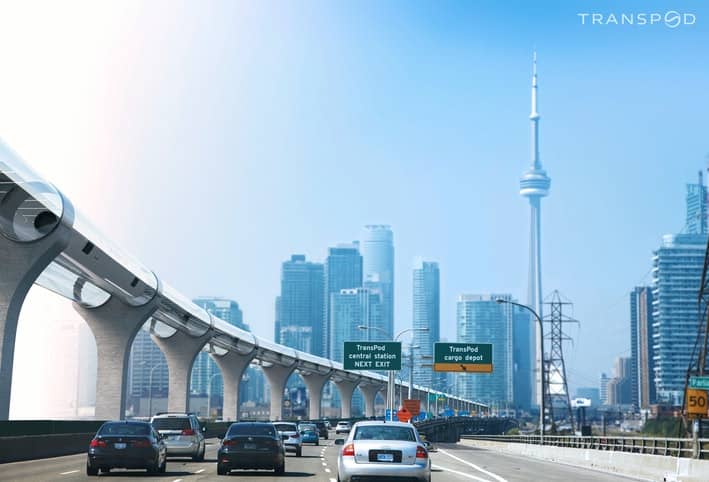 Gendron says he believes he can have Albertans zooming between Calgary and Edmonton — at speeds of up to 1,000 km/h — by the year 2030.

Hyperloop companies are currently running full-scale tests to establish safety and insurance measures while optimizing and fully integrating all of the technical components that make up the high-speed transportation system.

This past December, the Technology Innovation Institute (TII) — the “applied research” pillar of Abu Dhabi’s Advanced Technology Research Council (ATRC) — announced a collaboration for research, innovation, and localization of the futuristic high-speed transportation method with Virgin Hyperloop.
“By working with exceptional talent, universities, research institutions and industry partners from all over the world, the Institute [TII] connects an intellectual community and contributes to building an R&D ecosystem in Abu Dhabi and the UAE,” says a Virgin Hyperloop press release. “The Institute reinforces Abu Dhabi and the UAE’s status as a global hub for innovation and contributes to the broader development of the knowledge-based economy.”

In 2017, HyperloopTT opened a 3,000 square-meter European Hyperloop Research and Development Center in Toulouse, France. Two years, with tube assembled and vacuum pumps installed, HTT completed the world’s first full-scale system. The Toulouse R&D center also serves as HyperloopTT’s staging ground for global commercial projects.
Comprehensive feasibility studies have been analyzing the hyperloop system for all companies, which are finding the system is economically and technically achievable with the prospect of generating a profit, many of which won’t require government subsidies.

Currently, TransPod split its team up between Toronto and Droux but the company has an R&D centre in Italy. In 2020, the European Union approved a €30 million deal in subsidies for the company which TransPod uses for research and development in both Italy and France.
The company is in year two of its R&D phase, originally scheduled to take place from 2020 to 2024. The construction of its test track would then begin between 2022 and 2027.

Various routes have been proposed for hyperloop systems that meet the approximate distance conditions for which the transportation method is hypothesized to provide improved transport times:

Does it make sense for regions to invest in hyperloop?

Some might argue it’s still too early to estimate the economical standpoint of investing in hyperloop. According to The Ecomonist, financial experts believe that the US$6 billion price tag associated with hyperloop is a “severe understatement” in terms of design, development, construction, and testing of an entirely new form of transportation.  The Economist says that estimates are unlikely to “be immune to the hypertrophication of cost” that every other grand infrastructure project seems “doomed to suffer.”

Josh Giegel, Virgin Hyperloop’s co-founder (and test passenger), says that “from an investor point of view, people with patient capital — so somebody who’s not looking for an exit in two years —someone looking for something like a transformative nature that might take ten years, might be wise to invest.” He compared the industry to that of SpaceX where it started in “a garage and now they’re almost putting people on another planet.”

It’s an investor profile that many investors and regions may not be used to, but when you’re dealing with a world-altering mode of futuristic transport, it’s tough to say.

Considering many of the globe’s major players are pouring funds, development, and time into hyperloop, you might want to act fast. Like, 760 km/h fast.