The world’s longest land border has been closed for over 14 months. The historic closing of the 5,525-mile border between the United States and Canada has been closed to non-essential travel since March 2020. And while I don’t deny the importance of closing international borders during an unprecedented pandemic, it’s time the Canadian government sets up a timeline to reopen the border for trade and travel.

The border’s closure has been continuously extended on a month-by-month basis but Canada and the US need a set timetable. We should no longer be forced to function on a monthly basis and I think it’s time the border opens, using August 2021 as a realistic and achievable goal.

During a press conference from Ottawa in late May, Prime Minister Justin Trudeau said Canada is “on the right path” to reopening the border but urged officials will only make a decision “based on the interests of Canadians and not based on what other countries want.”

Trudeau has insisted that border restrictions must stay in place until at least 75% of Canadians have received their first COVID-19 vaccine shot. As of June 3, 50.6% of Canadians have had at least one dose of the coronavirus vaccine, according to the Canadian government’s vaccination dashboard. That’s on par with the US, where 50% of the total population have received at least one dose of the vaccine, according to the vaccination tracker from the Brown School of Public Health.

“We all want to reopen, we all want to go back to travelling to see friends, take vacations, go on trips,” Trudeau said. “But we don’t want to have to close again, tighten up again because there’s another wave.”

The border remains open for essential travel only, essentially only not disrupting the flow of food, medical supplies, and other essential goods between Canada and the US.

If we take a look at how well the COVID-19 vaccine rollouts are going across both countries, it’s time Canada and the United States get back to business. Literally.
Setting a concrete reopening date for the border will give travellers and investors certainty.

Some numbers between Canada and the US

Conversely, 14.9 million Americans travelled into Canada in 2019, compared to only 1.9 million in 2020 — an obvious drop because of you-know-what.

US goods and services trade with Canada totalled an estimated $718.4 billion in 2019, according to the Office of the United States Trade Representative (USTR). Exports were $360.4 billion and imports were $358 billion. Canada is currently the United States’ second-largest goods trading partner with $612.1 billion in total two-way goods trade in 2019.

It’s never a surprise to highlight the importance of our trade relationship with the United States but by going over numbers, it becomes abundantly clear that investments between borders are vital to our economy. 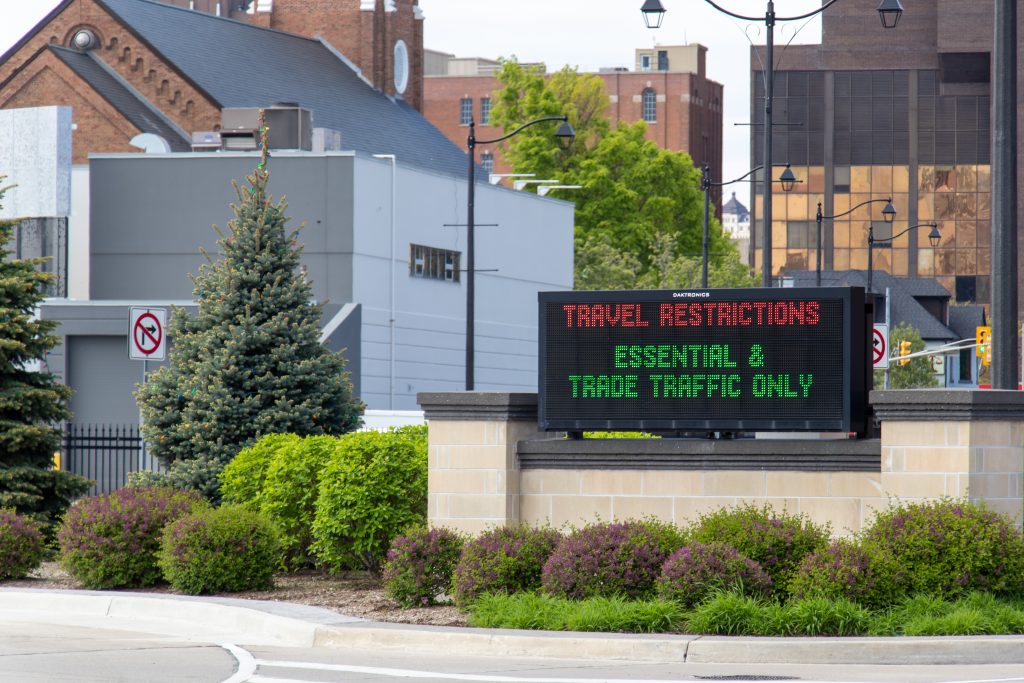 Apart from economic benefits, reopening the border has obvious social ties to it too.

It’s time to save tourism between Canada and the US

In May, the Tourism Industry Association of Canada (TIAC) called on the federal government to reopen the land border with our neighbours by the end of June. Beth Potter, the President and CEO of the TIAC, said she is encouraging the feds to “save tourism.” She said the pressure is continuing to mount for the borders to open. During a May 28 press conference, Potter said the federal government “must act now and open the border for the end of June and send a strong signal of a normal travel summer to save tourism in Canada.”

As COVID-19 vaccinations ramp up in both countries, at least a tentative date should be pencilled in for the border’s reopening.

As it stands, both Canada and the US have said the border will remain closed until at least June 21. What’s more, travellers into Canada are mandated to quarantine for 14 days, the first of which are spent at a government-assigned hotel at the traveller’s expense, upon arrival into the country (usually between $2,000 to $3,000.) A COVID-19 expert advisory panel recommended that the federal government cease the hotel quarantine — which has been in place since February — citing that there are “significant” costs and resources devoted to the initiative, not to mention being burdensome to Canada-bound travellers.

Using successful vaccination rollouts in both Canada and the United States as reasons, the border closure no longer makes sense medically.

Friends, family, and businesses have been separated for over a year. US citizens can’t visit their summer cottages and what’s worse — the closure isn’t equal. Canadians are allowed to travel to the US by air for example, but Americans can’t cross the border for anything that isn’t deemed essential. Canadians heading south need only a negative COVID-19 test from no more than 72 hours prior while Canada enforces the hotel quarantine.

Again, I’m not debating the severity of the virus but merely pointing out why the border closing is no longer necessary.

It’s also important to note that cases are steadily decreasing countrywide in both Canada and the US. The governments should be at least planning to make a firm date on the border reopening — call it August 1 — rather than periodically keeping it closed and unknown. Everything else during the pandemic had a plan, it’s time the authorities behind the world’s largest land border enacted one too.

As of this writing, nearly 42% of the United States has been fully vaccinated against COVID-19 and 59% of the Canadian population has received at least one dose of the coronavirus vaccine.

Canadian experts are saying the border is expected to stay closed until the fall. Italy, Greece, and France will be open to travellers by mid-June. Even the European Union agreed to accept visitors this summer who are vaccinated. No signs are currently in place for the US and Canada and if we wait until the fall, we’ll be almost one-third of a year behind.

What are your thoughts about the border having no reopening date? Do you feel both countries have done enough to warrant reopening the biggest land border in the world?